We found LeapEdTech a great platform for edtech startups to gather insights from heroes working on the ground and discover massive opportunities in the edtech sector in India.

Some great points discussed during main sessions are highlighted below.

Next in EdTech : Uncover the latest trends in technology that’s changing the future of education

Mayank Kumar CEO, UpGrad highlighted the fact that technology should obviously be used for improving access to content/education but at the same time shared how they at UpGrad leveraged it also for a better user experience and scalability for courses. He clearly stated that the course takers have only “Jobs, Jobs, Jobs” in their mind and is all what is expected by people when investing in higher education online.

Ishan Gupta, MD, Udacity shared a tip with entrepreneurs that if one is defining their marketing strategy they have to keep a balance between push and pull. He stated that getting/increasing traffic for them is not the main job currently but to retain the existing ones by improving experience of platform through forums, mentors, technology etc.

Mohit Bhatnagar MD, Sequoia on the other hand spoke about the problems/opportunities that exist in Indian EdTech especially from the lens of investors. He shared that English language learning is a good space if we can have some innovation in this zone; as we can clearly see it is getting popularity in rest of Asia whereas India needs it too.

Shifts in the funding landscape for EdTech : From luke warm to a sudden boil

Abhishek Gupta, COO, TLabs started the session by small activity in the conference hall to get a feel of type of entrepreneurs and startups, and he found that most of the edupreneurs (over 50%) had their focus on targeting K-12, followed by higher education (roughly 30%), vocational (12%) and corporate (8%).

Manan Khurma CEO, CueMath shared how he had a slow start too while discovering his business model. He started teaching JEE aspirants but found his model as not scalable and capital intensive. He highlighted how you will have many companies trying to provide same content, same technology or at least will come with similar propositions, but how a business model innovation can help you scale faster. After spending time interacting with customers and getting their feedback he started to enable people to setup centers. He also spoke about the opportunity they offer to math educators for teaching 13-14 hrs a week and earning INR 20-25,000 which.

Customer acquisition becoming easier; technology getting more stable and innovative distribution models are some factors he found as reasons for growth of edtech companies. In his case, distribution model and strategy were key reasons behind monetization/revenue. From his experience he shared with edtech startups that a product is not complete in itself but it is complete only if you also have the knowledge on how to reach end user who has willingness to pay. He clearly stated that there is willingness to pay in the market and it is really high but with an obstacle in form of initial idea buy-in, which is toughest obstacle to cross.

Dev Khare, Partner, LightSpeed India clearly stated that the interest edtech sector is seeing from investors is high even though the ticket sizes have been smaller in 99% of the cases. For investors to consider the space, he highlighted clear factors like the amount Indian parents spend on their child’s education and the market size in terms of decentralized procurement and number of institutions.

He share a fact that total investment in India from Seed to Series B has been USD 1 billion last year, out of which USD 200 million in EdTech is a good number even though major chunk of it went to Byju’s.

He clearly stated that the failure reasons for edtech startups are:

He showed more interest towards B2C startups than B2B.

Mukul Arora, Partner, Saif Partners shared that he spends quite a lot of his time seeing the edtech scene and believes that similar to e-commerce factors in behavior change are falling in place for edtech sector too. But he was clear that businesses where human element is high, like language learning may be is still more relevant.

Srikrishna Ramamoorthy, Partner, Unitus Seed Fund, India shared the fact of big chunk of funding going to small number of companies which states there is a disconnect between what entrepreneurs are building and what is getting funded. AI & VR startups, mobile first businesses and products that serve masses are the startups that would excite majority of investors like us even though he believes B2C is a harder space to be in.

Murlidhar Suryanarayan,Founder & CEO – Lodestar started the session by showing some slides on the Indian EdTech market, landscape and addressable market to give clarity to startups.

Ranjit Radhakrishnan Chief Product Officer, BYJU’S shared his learning on how one can achieve revenues and profitability with a clear understanding that people do pay if they get value. He shared how excellent technology at Byju’s took the business to great heights obviously supported by their amazing engineering and content team.

He stated that Byju’s wanted to create something with an intent to reach 100% of audience and not focus on only 5-7% of the cream audience. Ranjit highlighted that Byju’s in initial days of their business i.e. at time of running only offline centers created a strong connect through offline activities in form of events with students and parents, and validated the tech transition and idea offline. Obviously now they are spending heavily on online and digital ads.

Rupesh Shah, Founder, InOPen shared tips on how they could reach 700k, 200+ schools. From his experience, he advised startups to clearly see if it has to be a B2B business or you are getting into it just for the hurry of scale and to know who the end user are before jumping into B2B sales. After their acquisition by Next Education, they have scaled the program to over 1500 schools now.

Robin Aggarwal, Director, Learning Paths School highlighted his experience as a school leader that for schools a decision on administration product is easy, as we do not see much differentiation in products but for other learning and teaching products there are a lot of stakeholders involved and that takes time. He also stated that startups highlighting 40-50 schools is not good enough for school leaders as a case study but kind of schools matter a lot.

The session highlighted that the fastest and cost effective way to grow is partnerships. Good thought for an edtech startup’s initial sustenance.

Sugata Ghosh, Director: Global Academic Publishing at Oxford University Press shared that they are open for not only tech partnerships but even content partnership and have started investing in startups in the space.

Beas Dev Ralhan, Co-Founder & CEO – Next Education India Pvt. Ltd had a clear perspective on the fact that all skill sets cannot be served by one single entity, schools need tech vendor to bring all in place so they work as a system integrator. He highlighted how the idea of hardware financing and also the fact that acquiring tech from same guy becomes cheaper which allows them to marginalize pricing of other products were key reasons that helped them grow.

Vinay Sharma, Business Head, S.Chand Group also shared how they could see value in partnering with startups and highlighted examples like Edutor for mobile device implementations and FlipClass for larger teacher access.

Tweets from the event: search #LeapEdTech 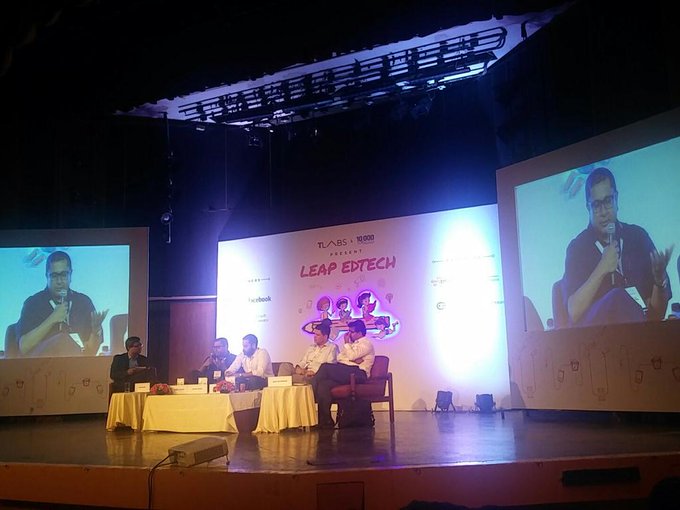